You are using an out of date browser. It may not display this or other websites correctly.
You should upgrade or use an alternative browser.
Welcome to GeezeZone!
This is a community dedicated to the discuss all things 90's and 2000's! Here we discuss and write about old tv shows, music, movies, games, toys, etc. Feel free to join to will be able to: comment on articles , join our events, and stuff.
Join today!

Image: Courtesy McDonalds
Before the Coronavirus pandemic, I went to McDonald's with my kid cousin; she got a Dory Plush. I just bumped into the toy today and thought…ahh…let me talk about them today. But since the list is long (1979 – 2020), I will break the post into two. I will start with the 1990 – 1998 era.

For many kids of the '90s, McDonald's plastic trinkets included in Happy Meals were the best gifts of their childhood. My favourite was the Furby and Tamagotchi mini Keychain.

But if you missed this, last year, on their 40th anniversary, McDonald revived the toys but for a limited edition.

Happy meal toys have made remarkable development since they started to sell children's mills back in 1979. eBay is packed with hundreds of dollars' worth of these antique items.

The toys received praise and criticism in equal measures. Some people accused them of encouraging unhealthy food habits in children and polluting the environment with non-bio-degradable single-use plastics.

Well, the '80s had some nice Happy Meal toys, but if feel the '90s had the best of them all. Now, let’s go down the memory lane and feed our nostalgia.

The Fast Food Wars: McDonald's Vs Burger King
McDonald's was never the same after the launch of Happy Meals in the summer of 1979. Back then, there was a stiff competition between McDonald's and the Burger King. On the other side, Wendy and Hardee were on each other's neck. Eventually, McDonald's and Hardee won the battle. The real revolution started in 1990.

Super Mario Bros. 3 toys (September)​
Tiny Toon Adventures toys (October)​
The Rescuers Down Under toys (November)​
In 1989, Burger King established the Burger King Kids Club. This was during the baby boom in the late 80s. It was officially launched in January 1990.

https://youtu.be/48omeGMwSUY
The McDonaldLand gang by then had been much more iconic in the 20th century than the new Kids Club of Burger King.

The '90s had some excellent Happy Meal toys. Let us go to the bottom of the Happy Meal box, our bagged prize. Back in the days when McDonald's gave up the Styrofoam container and paper Happy Meal box in favour of environmentally-friendly wrappers and Happy Meal Packages.

Super Mario Brothers 3
The year 1990 was the beginning of many technological and industrial revolutions all over the world.

Super Mario Brothers 3 (SMB3) is the most awesome of the McDonalds toys that were released in 1990. It was released in September of 1990 alongside the Jungle Book, Peanut toys, and the Berenstain bears' books.

The Super Mario Brothers 3 was a tone more superior to the others released in the same year. But it was a little disappointing for the NES toys collectors and Happy Meal toys collectors.

The SMB3 promotion was a highlight in the pan promotion for Xennials with the same number of characters in the meal as with Disney's "The Little Mermaid" Promotion of 1989.

The Little Mermaid was more popular than the SMB3 promotion, and both had four toys. There was a lengthy debate after that, on whether the four toys were appropriate to promote SMB3.

The year 1990 signified the drop of Happy Meal Toys. It is the year that King Koopa, Toadstool, Koopalings, and Zelda 2 disappeared. I was not aware that these Super Mario Brothers were the last Happy Meal Toys from SMB in the 1990s. The 90s seemed looked like an appropriate time for the growth and development of the toys.

As a Nintendo lover, I would love the Super Mario Brothers 3 to be more like the Hasbro Super Mario Brothers Cup or maybe the Simpsons Go of the Burger King Kids Club. In the second week in August 1990, it appeared that SMB3 would be distributing two toys per week. I got the second toy, Luigi, at around that time. The Super Mario Toy had a spring underneath for toppling Goombas army, and Luigi would drop Koopa Paratroopers from the table.

The SMB3 required a proper send-off from McDonald's if Nintendo and McDonald's partnership were to continue in 1990. I equally loved and hated the collaboration between these two giants. The SMB3 Happy Meal toys promotion had a fantastic manual art of the SMBe game in its current form in the summer of 1990.

Simply put, the Super Mario Brothers 3 Happy Meal toys were smart but not that much to compete favourably with Burger King at that time. But all the same, the SMB3 was the Kids' favourite cartoon in the early 90s.

Image Courtesy: Ebay.com
Super Looney Tunes
In 1991, the target audience for McDonald's increased. It is the year that they realized that there is a Kid in every adult. With that in mind, they redesigned their toys to fit the kids, teenagers, and some adults alike.

When Home Alone came to the dollar theatres before 1991, McDonald's gave out Tiny Toon Adventures Flip Cars as Happy Meal prizes. But this was not as impressive to the Xennials or Millennials. At the time, Looney Tunes and DC superheroes were a fantastic pair.

The Petunia pig was featured as Wonder woman in this collection. Tazmanian Devil was the Flash(1990 -1991), Bugs Bunn as Superman (dated to Chris Reeves films), Daffy Duck as Batman (the classic 60s show), Bat-daffy was featured in the Bat-Duck mobile (Batmobile).

Each toy came with a comic book that doubled as a colouring book. These are were the most prominent 1991 Happy Meal players from Tiny Toon Adventures, a hit cartoon of the '90s.

The characters in Looney Tunes were designed in a way that you could remove the superhero costume by snapping the two parts. Although I was frustrated by the lack of a Daffy Duck, the U3 toys sufficed.

I remember Super Bugs was Super Looney Tunes' most advertised toy. This made it famous for the kids back then. At the time, cartoon lovers and cartoonists were still mourning Mel Blanc.

McDino Changeables – Haha! You thought you had some Fresh fries picked up? Only to find out it is a dinosaur dressed as French fries. Creative indeed.

Batman Returns
When I was a kid, I couldn't choose between the CBS toys on Saturday mornings, and the Batman Returns toys from Summer 92.

The Doc Brown in the Dolorean landed McDonald's in trouble for the choking hazard was not written in a larger font for parents of toddlers to see. The application for painting for Doc's Dolorean was not as amazing as its previous version, but the picture of Christopher Lloyd and the name of the Dolorean Car model on the rear made it worth having.

I would personally replace the old Verne's car with a Biff Tannen car. Unfortunately, the Batman Returns Happy Meal toy promo was discontinued in the middle of its run.

At the time, Burger King also had some special release for kids, like the Archie cars, Capitol Critters, Goog Troop, Aladdin, and Disney Parade. McDonald's robbed Burger King of its popularity in 1992 until Disney Aladdin was released.

In the same year, Burger King updated its Burger King Club logo to attract more kids to Burger King restaurant rather than the Kids Club meal.

Earth Day toys (March)​
Mattel's Totally Toy Holiday toys (December)​
Dino-Motion Dinosaurs
This was a combination of The Simpsons, Roseanne, and Family Matters. The Simpsons were the most controversial TV family when it debuted in 1990. On the other hand, Jim Henson's Dinosaurs was the best TV Show in 1992.

I couldn't wait to see Baby Sinclair telling him, "Not the Mama” and Knock Earl Sinclair with a frying pan over the head. The series was widely produced in 1992, and Thelma and Louise were the first to be released on tape.

Six toys were given out on the $1.99 Happy Meal; they included Earl Sinclair, Fran Sinclair, Baby Sinclair, Robbie Sinclair, Charlene Sinclair, and Ethyl Phillips. All these toys were fitted with a square button to 'pump up.’

The 1993 Batman, The Animated Series fans were attached to these toys. And every kid would have at least a couple of them in his or her collection. The baby Sinclair toy with a black skillet was great for rollerblading, watching Beverly Hills 90210, and watching Wayne's World movie in the mid-90s.

It didn't matter if I had a Baby Sinclair toy with a black skillet or blue pot, as long as a Baby Sinclair was available in the collection with a kitchen utensil to hit Earl on his head!

Sounds cruel, but hey, these are just fictional characters.

There is no other video game kids' meal toy promotion that has ever matched the influence of Super Mario Brother 3 Happy Meal toys, but Sonic the Hedgehog came close.

Around this time, Burger King gave McDonald's a run for their money by doing a Lion King Toy promotion. But Sonic the Hedgehog blasting off with Dr. Robotinik and Knuckles battles were still ranking high in popularity.

This list can go on and on endlessly. But I will list the remaining Toy promotions here; then I will keep adding details momentarily. 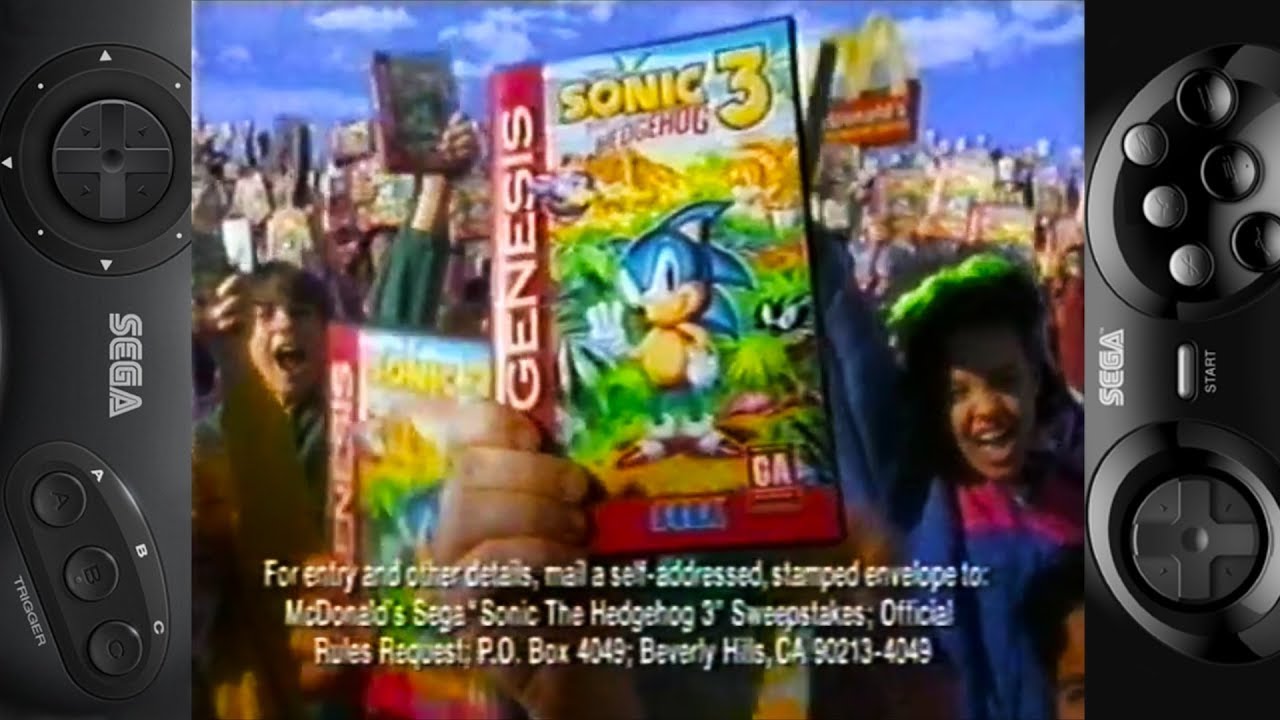 I will keep updating the article with the other Toys until we talk about all the toys from 1979 – 2020 and beyond.

Also, I apologize for not having many photos; there are very few royalty-free photos for these toys. But I will keep updating the article regularly with the relevant images. You know, pictures speak 1000 words.

Is the above list conclusive? If not, let me know the toys that I have missed on the list.

Let me know in the comments below your favourite Happy Meal toy(s). Share your thoughts about McDonald's back in the '90.
Last edited: Sep 4, 2020
Reactions: Grizzy{w} and Abizaga
Click to expand...

Geeze
I write a lot!
Writer

Oh god some of the items on that list. I distinctly remember the Muppet Pirate Island ones!!
Reactions: Grizzy{w} and bomb

I know right? Do you remember the animal transformer ones? i had the manta ray and the panther!!
Reactions: Grizzy{w}

YES! i still remember visiting my cousins as a kid around the time of the King of Thieves one and I got a genie toy with a cake cart or something like that.
Reactions: Grizzy{w}

Even the happy meal boxes are nostalgic-af
Reactions: bomb