You are using an out of date browser. It may not display this or other websites correctly.
You should upgrade or use an alternative browser.

I remember that theme music the most. Oh so good lol. I used to watch this a lot. I had a few of these books based on the show. Wish I still had them, but I sold them with my comics years ago.
Reactions: Grizzy{w}

Yeah. I used to watch that show all of the time when I was a kid. I really wish the ideas from the show should have been implemented in the 2000 film franchise. Rogue didn't even have a fraction of her powers in the movies that she had in the cartoon show. Hell, we didn't even really get Jubilee or see Cyclops get any kind of screen time that he deserved. And we sure as hell didn't get Gambit, except in a poorly rated film, and he was POPULAR in the comics and the cartoon. The cartoon really captured the comics and gave us kids what we deserved.

My roomates actually watched it together over the course of like a month or something like that. I remember really digging it, myself. Hey does anybody remember during the 90s, fast food toy promotions of the time? I remember one and I got a light up storm top.
Reactions: Grizzy{w} 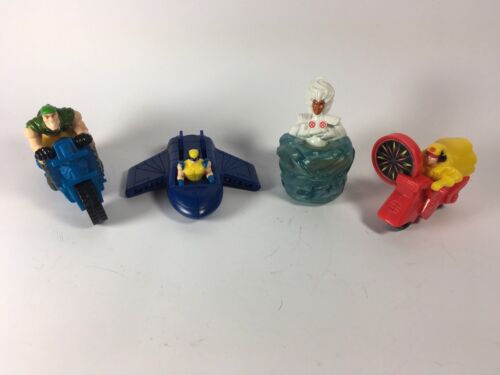 OH MY GOD THOSE ARE THE ONES! Woah its been ages since I saw them last woah! If I recall correctly, it was a pretty cool top, too.
Reactions: Grizzy{w}

I remember I had the Wolverine in the Blackbird. But that's the only one I ever got when I was a kid lol. Good times!!!
Reactions: Abizaga and Grizzy{w}

Terminated said:
I remember I had the Wolverine in the Blackbird. But that's the only one I ever got when I was a kid lol. Good times!!!
Click to expand...

Dude no way! I seriously thought I was the only one to remember these!! I'm so happy to find out that's not the case!


Grizzy{w} said:
dude mcdonalds brainwashed us so bad that i really believe some of the biggest nostalgic triggers is just from seeing happy meal toys and ads LMAO

DUDE I know what you mean! Sometimes when I remember a specific memory it's connected to a happy meal toy of the time!
Reactions: Grizzy{w}

hhahah trust me I know. When i see the one's i forgot about it instantly brings me back !

It’s been my childhood favorite along with Star Wars, The Avengers and Transformers.
Last edited: Oct 3, 2020